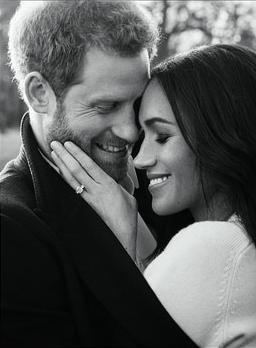 The Marriage of Prince Harry and Meghan Markle will take place tomorrow in St.George’s Chapel at Windsor Castle at 12pm. The Queen granted permission for the ceremony to be held in the place of worship, which seats approximately 800.

The build up to the wedding has dominated the headlines for weeks now, with numerous stories and controversy surrounding Meghan and who will walk her down the aisle. Royal officials have now confirmed Prince Charles shall escort the Bride for tomorrows ceremony.

Details of the Princess-to-be wedding dress has been a tightly guarded secret, which will be revealed on the big. Here is what we do know so far:

The Cake – a lemon elderflower bake that will incorporate the bright flowers of spring, will be made by Violet Bakery’s Claire Ptake.

The flowers will be branches of Beech, Birch and Hornbeam, White Garden Roses, Peonies and Foxgloves from the gardens and parkland of the Crown Estate and Windsor Park.

Music for the service will include a number of well-known hymns and choral music, under the direction of James Vivian, Director of music at St George’s Chapel.

The Dean of Windsor will conduct the service and the Archbishop of Canterbury will officiate, as the couple make their vows. They will undertake a carriage procession from St George’s Chapel through Windsor Town returning to Windsor Castle. The festivities will begin early on TV and the ceremony is due to take place at 12pm, on both BBC and ITV; it will undoubtedly be watched by millions of people all over the world.

The Ceremony will be an event of national importance and has been creating headlines in all the papers for weeks now. Hundreds of organisers of street parties have applied to local government for road closures, pub opening-hour extensions and public viewings.

As many as 100,000 people are expected to descend on Windsor for the big day, viewing areas are created along the procession route and there will be live entertainment in the town centre. After their nuptials, the couple will take a 25 minute procession through the town.

However you are celebrating the Royal Wedding, we hope you enjoy the day.

If you would like to donate to Scotty’s Little Soldiers, one of the beneficiaries of the Royal Wedding, you can click on the link below: